Back in the Netherlands – after having worked in Yemen for years – Lidwien Scheepers was looking for an opportunity to present Yemen in a positive way on the world stage as Yemen is a misrepresented country from various perspectives. She has found this opportunity in the form of the International Architecture Exhibition in Venice in 2016.

In November 2014 Lidwien Scheepers visited the International Architecture Exhibition in Venice. She noted the presence of some Arab countries and the absence of Yemen. During this visit she managed to contact the responsible person of the Visual Arts and Architecture Department of the Biennale who explained to her the procedure to follow in order to have Yemen invited as a national participant by the President of the Biennale.

Seen the rich and fascinating architectural heritage of Yemen Lidwien 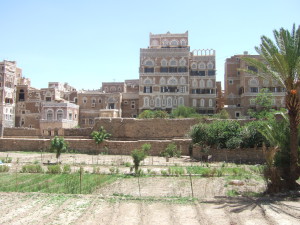 Scheepers is eager to have this beautiful country for the first time shining on this leading international platform for architecture in Venice in 2016.

The first step to be taken in order to represent Yemen in Venice was the participation request “by the competent Governmental Authority through which the Country normally performs activities of the same type”. Therefore, Yemeni supporters of the initiative approached the Yemeni Deputy Minister of Culture, H.E. Huda Ablan. She welcomed the idea to represent Yemen in the International Architecture Exhibition in Venice. Thereafter, the required correspondence with the Biennale was drafted in close cooperation with the Deputy Minister of Culture and the Undersecretary for Cultural Relations, Mr. Ayed Ali Al-Shawafy. On 9 September 2015 Yemen received the official invitation from the President of the Biennale as a national participant.

Where we stand right now

The challenge ahead is the nomination of the commissioner and the curator as well as the development of an idea/concept and a design of the Yemeni participation in collaboration with Yemenis and other experts that worked on Yemen heritage. Subsequently, a detailed proposal for the exhibition project has to be developed. It goes without saying that funds are needed for implementation.